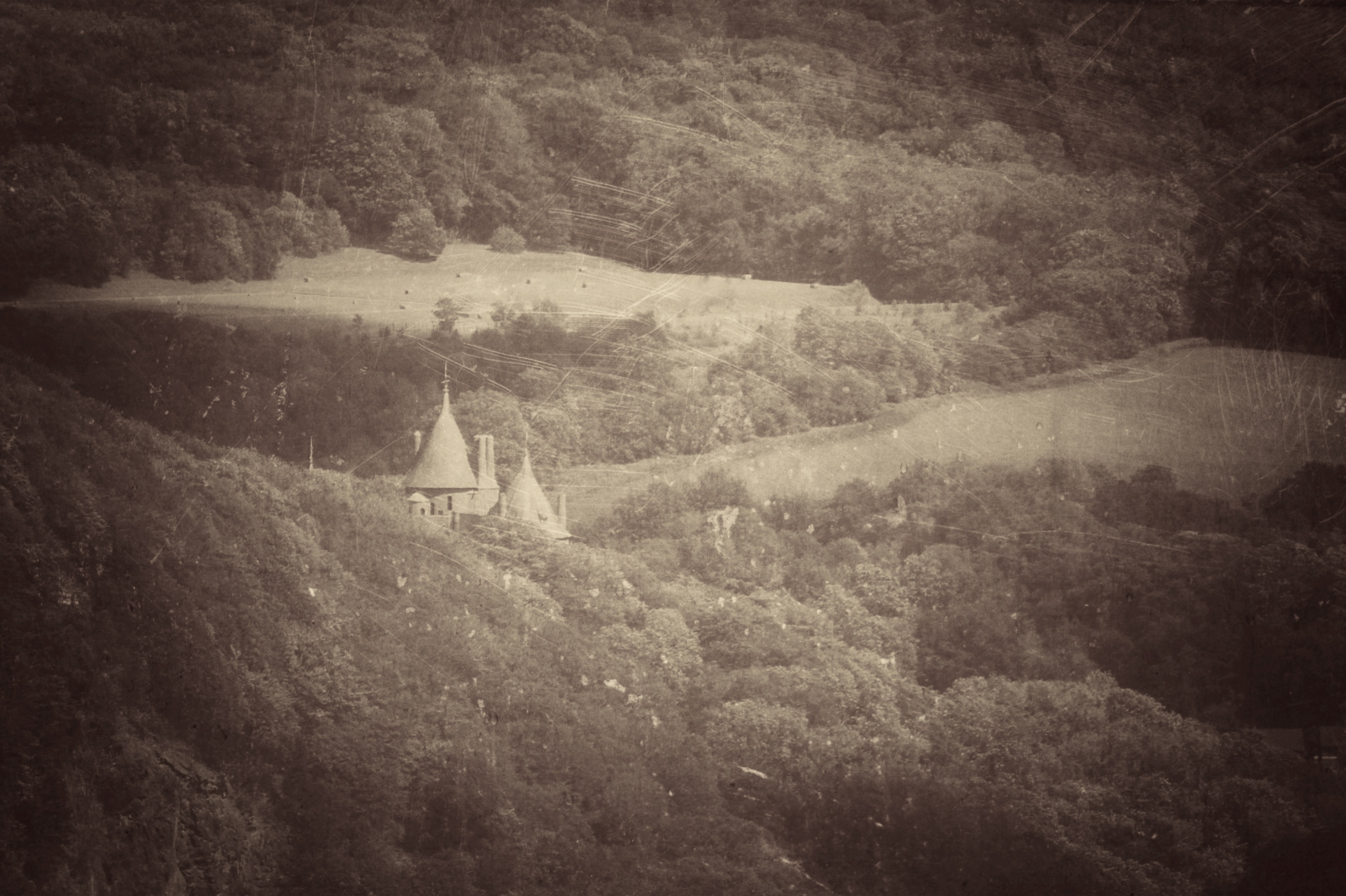 I spent much of my time in holidays out on the hillside, as far from the Inn as possible, in case Susie should call me to help with the daily tasks that befitted a small girl of my position.

It was ever a delight to smell the bracken and look down from the breast of the mountain to the valley below, at Castell Coch peeping out from a haze of green. One day in August, I was interested in calculating the quickest way in which to reach the village of Tongwynlais that night with one or two other companions.

My grandmother objected to our going. She said we should “see something” on our way home. Sammy, Ifan Glamore’s boy, said that “something” meant “Ladi Wen.”

Below me ran a pathway down into the woods. There it lost itself, but lower down a white ribbon of road ran parallel with the mountain road.

It was no good going to the fair until the moon rose, my companions told me. By eight o’clock it was riding across the valley and we were running through the gray-green woods looking neither to right nor to left. There was Sammy, Ifan Glamore’s son, vowing that we should see the White Lady coming home that night. We had run past old Mari’s house in case her eerie face should be peeping over the hedge. I never liked her and never believed her when she said that she had once been with the fairies for a year and a day. She certainly had been missing from the hillside, but it is my experience that teaches me how to view these tales that were cast about her.

We must have run most of the way down the road past a few cottages near some tinworks, then on to the village of Tongwynlais. It is difficult to explain how these different villages viewed each other, though so few miles apart. They might have been different worlds. Sometimes an inspiring youth decided to seek a wife outside his village and he would come seeking her on the fine moonlight nights.

When we reached the field where the fair was held we paid our pennies and stood bewildered at all the noise and glare. It was almost like the picture of some German scene with the castle on the heights, the moonlit river flowing down, and near its banks this mad scene of reckless gaiety. Gingerbread, brandy-snaps, rice pudding and other dainties lay before us. Mysterious-looking booths with swarthy men shouting their entertainments at us, girls screaming, men shouting round the shooting ranges and cocoanut stalls, then fat girls dressed up in showy colours dancing on the vacant spaces. It was a weird picture, and we, being very, very young, felt half frightened, and almost wished we had not come, but Sammy, the bravest soul among us took my arm and made me dance with him.

By ten o’clock we felt it was late enough to start on our romantic path home and I can always see the flare of torches which made the road outside the fair ground seem darker till we had run along and crossed to our side of the valley. It was only when we got into our woods and tried to climb quickly that we felt the burden of our sins.

Sammy swore that “Ladi Wen” sat on one of the trees, but I have often looked at that tree since and wondered if it was a beautiful white owl he saw there. Certainly its “cydyoo, cydyoo” sounded ghostly through the silent woods.

When I reached the Inn, nobody was there – the door was open on the latch and a beautiful fire burned on the hearth but there was no light in the lamp.

I thought my grandmother had just been called out to someone who was ill and dying, for she it was who laid out all the dead on that hillside. She used to say that she knew when a death would occur because she always heard the drawers of the linen-chest being drawn out the night before. I remembered her saying this the previous night in her old fourposter bed. There was nothing to do but wait, so I sat down in my usual corner.

Suddenly a stranger stood beside me in the gathering darkness. Great gusts of wind blew up from the valley and down the wide chimney, and so thin and gaunt was the stranger, that I envisioned him being whirled up the chimney and out into the windy air to mingle with the spirits of the mountain top.

But he said not a word! He only looked at me from deep, sunken eyes, where burnt a flame as fierce as the wind.

Old Father Time must have forgotten him on earth. His clothes smelt of must and made me think of the old curio shop in Crockherbstown, where the relics of centuries lay mouldering in the dust and grime of age. His eyes wandered to the old-fashioned oil lamp on the deal table and back again to something he carried on his side.

It was an old iron lantern with a conical top, an iron handle and tiny diamond panes of thick knobly glass. Inside, there was still a gleam of thin, yellow light. This fascinated me and I looked long at it.

Nobody waited to be asked to sit down in the Mountain Inn. But the stranger was still standing, getting gaunter and gaunter, I thought. Perhaps it was the gathering gloom and the wind-drawn fire that added to his size.

I gabbled to myself as I learnt a poem for home-work. Then a bat flew in at the doorway and an owl cried sadly down in the woods.

But I looked up only to see those deep-sunken eyes still fixed on me.

“What do you want?” I asked, gazing on a level with his white, shiny hands.

He did not answer. I thought I would try Welsh. Still no answer.

I was getting angry now and beginning to think ugly thoughts about old people.

Slowly he began in Welsh. “I know that Jesus spoke Welsh, I was with him.”

His deep, dark eyes flamed, the white of his cheeks grew whiter as I asked again-

“I am a trimmer of lamps,” he said, as though answering me from the depths of a mighty cavern and looking at the big lamp on the table, “Shall I trim yours,”

“No, Grannie wouldn’t like it. It is dangerous, she always does it herself.

“But her lamp is not filled with oil and she will be a foolish maiden.”

The thought of Grannie being a foolish maiden struck me as being funny and I laughed aloud, but, looking at the stranger’s solemn look of pain, I stopped.

“I…’m sorry…” I said, wishing Grannie would return every minute.

“Shall I trim this lamp, Pearl?”

I wondered how he knew my name, and without waiting for me to say yes, he drew the lamp to pieces, and was soon manipulating it with a deftness that puzzled me. For his fingers were long and bony.

Soon he had set the light burning again and there was a beautiful dull, red glow all over the room. The pewter and brass shone almost religiously and the great painted dogs on the mantlepiece looked so happy. I couldn’t see anything beyond the stranger but the dark background of an eastern town where there were streets of strangely-built houses all huddled together. It was deep night, all lit up by the glare of torches and lanterns. There were sounds of hurrying and patterings of many feet and the noise of laughter and tears all mingled together.

“Five of them were foolish,” he said, “I told them and warned them, but they were young.”

“You were old then” I asked, not letting my eyelids flicker for fear of shutting out the wonderful scene.

“Than Methusaleh?” I was tempted to ask.

“Yes,” he said. “Listen too, I sang this hymn with Paul in Galatia.” And he sang mournfully-

“Art thou weary, art thou languid,
Art thou sore distressed?
‘Come to me,’ saith one, ‘and coming
Be at rest’.”

My wonder returned, when I heard footsteps. It was Grannie. Suddenly the stranger’s lantern flashed a blinding light and the stranger had gone!

“What have you been doing to the lamp, child?” asked Grannie.

“Nothing, the stranger did it,” I said.

“I saw no stranger.”

“He just went out, an old, old man, with deep sunken eyes, and a face, oh, so white, Grannie.”

I could see Grannie frowning and I felt sorry for the stranger. I looked beyond her to the wall where there was a large oblong picture of the “Last Supper.” Somehow the stranger reminded me of the figure on the far right of the picture – it might have been Saint Peter.

“Did you ever see such a thing?” I heard Grannie say. It must have been that old Shon y Ffigys (John of the house of the fig tree), who is cracked these many years since the Revival and thinks he can trim lamps!”

“Oh,” interrupted Grannie, “he says a lot of nonsense, child.”

But I could not but think that the lamp and lantern were not all nonsense!

This story was published in the June 1929 edition of “The Welsh Outlook”. From Llyfrgell Genedlaethol Cymru – The National Library of Wales.

“The Welsh Outlook was a monthly magazine published from 1914 to 1933 in Wales, articulating a political viewpoint of progressive liberalism and cultural nationalism.” (Wikipedia)

I can’t find any information online about the author. Perhaps articles were submitted by amateur writers. I’ve been thinking about the places mentioned in the story and trying to work out where Pearl lived. She says, “…look down from the breast of the mountain to the valley below, at Castell Coch peeping out from a haze of green.” Do you know of anywhere called the “Mountain Inn”?

If you’ve never heard of “Crockherbstown” before, you may be interested to know it’s now called Queen Street. Dic Mortimer has a great blog post about the area.

I’d love to hear from you if you have any information about the Tongwynlais Fair.