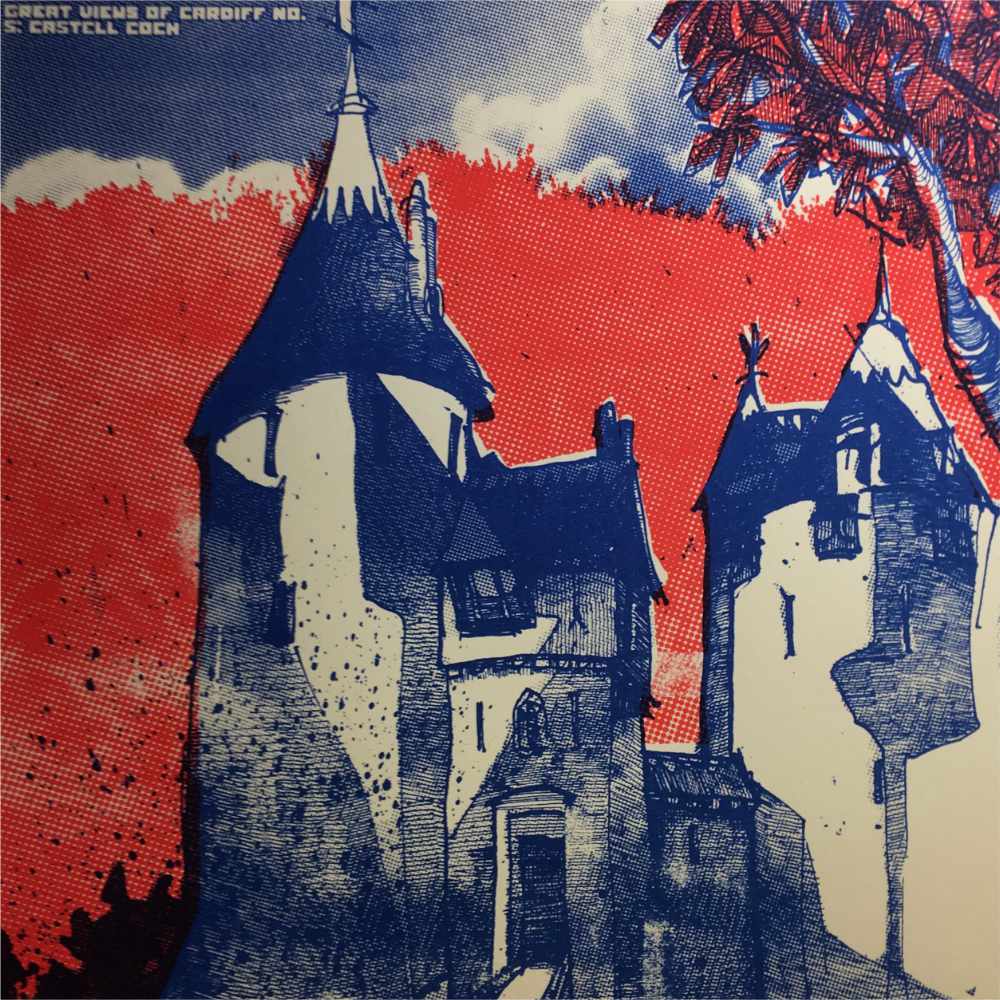 I recently stumbled across an image of Castell Coch that I instantly fell in love with. It turns out the artwork was produced by local artist Jon Durrant and is part of his Wonky Cardiff Project. I got in touch with Jon to purchase a print and to find out more about it.

Jon was born in Cardiff in 1976 and raised in Roath. He was educated at Marlborough Road Infants and Juniors, Howardian High School and St Teilo’s CIW High School.

He completed his Foundation course in Art and Design in Cardiff, then completed his degree in Illustration at the University Of the West Of England in Bristol.

The works shown are all based on bits of Cardiff that Jon finds interesting and were based on sketches and photos taken in situ. A pen and ink drawing is produced, then scanned into a Mac, then scaled up to make the limited edition silkscreen prints shown. The prints are produced at the Printhaus, based in Chapter Arts Centre in Canton, Cardiff.  The prints shown here are the culmination of 6 months drawing and printing during a hiatus from his teaching work.

How did you choose which landmarks to draw for the Wonky Cardiff Project?

I like Victorian architecture, it’s all around us in Cardiff and it’s beautiful. Victorian civic buildings were so beautiful, obviously buildings like the old library in the town centre was the main library in Cardiff, so had to look impressive, but small local libraries like the one in Cathays were amazing. Actually Gladstone School opposite that is another lovely building. Even Victorian Public toilets were great buildings. That’s going to be my next series of prints, Great Toilets of Cardiff. Not really. I’ve had plenty of suggestions for doing prints of more modern buildings that would be popular, but unless the thing I’m drawing is interesting to me I’m not going to do it. I know this probably isn’t very sensible, or commercial. I’ve done prints of things like the devil sculpture from Cardiff castle (above the door of the smoking room). I’ve always been fascinated by how horrible it is, so actually it’s not surprising I’ve not sold any of those.

To actually answer your question, I’ve mainly chosen things that I like, and are Cardiff landmarks, or things inside the landmarks. Or near them.

Has your style evolved over years or was this analogue/digital combination developed for the project?

I’ve always been a big Ralph Steadman fan (a great Welsh artist!) so I spent years in art school trying to emulate his style, with no success. I also love Gustav Dore, Ronald Searle, designers like Saul Bass, and comic artists Chris Ware and Jamie Hernandez. So my drawing style settled on doing big messy ink drawings, which I then meticulously hatch in using a .25mm Rotring pen. However I never really worked out how to add colour successfully . When I took a year out from teaching I joined the Printhaus in Cardiff. The restriction and the processes of silkscreen printing seemed to lend themselves to what I wanted to do. I could draw as I have been, scan the image into my computer, use photo editing software to add layers over, or under the original drawing, each layer can then be printed using a conventional computer printer onto transparencies, which are transferred onto silk screen screens making a stencil. These are then hand pulled, by me, onto 20 gsm cartridge paper. Most of my prints are only ones using two colours. I’ve done a few three colour prints, and will do some stuff with the Printhaus’s Risograph machine, which is a kind of retro photocopier/screen printing thing.

Are you planning to keep adding to the project?

Yes! I’ve got a few ready to be printed and sat in the hard drive on my Mac, and there are so many other great old buildings and statues. I’ve also got this daft idea of doing alternative, movie style posters for awful 80’s sitcoms, probably won’t be a big seller, but the idea of it amuses me. These can be seen on my website under the title “other wonky stuff” I have a few ideas and mock ups of things for T-shirts and mugs, but I’m still tinkering with these.

Are you planning to set up an online shop to sell prints?