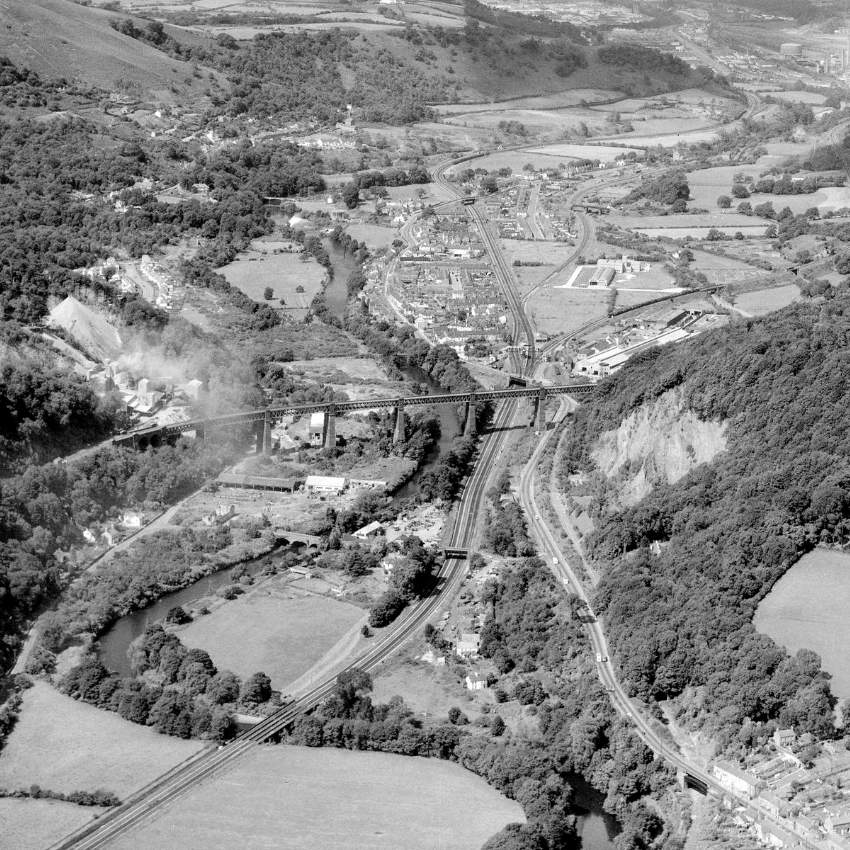 Terence Soames (Cardiff) Ltd was founded in 1946 and specialised in aerial photography. National Museum Wales have two particularly good images from 1957 and 1973.

The company were based at 22 Dumfries Place, Cardiff and they moved to St John’s Chambers, High Street Arcade in 1962. I couldn’t find any information about Terence Soames but I plan to investigate further.

Michael Woodward became the director in 1991 and is credited as the photographer in some later images by the company.

These photos show the significant changes before and after the demolition of the Walnut Tree Viaduct and construction of the A470.

This close up shows the old Tongwynlais Tunnel and the route of the railway going underneath Merthyr Road. The track was removed in 1952 and eventually demolished in 1971 for the A470.

You can just see the old primary school at the very bottom of the image.

The history of Tongwynlais railway station is sadly quite brief. I shared some fantastic photos in the article below.

The houses between the railway bridge and Birch Hill were demolished in 1968 for the construction of the A470. I was sent a photo of “Bridge House” by a reader and this post delves into its history.

The Walnut Tree Viaduct spanned the gorge just above the village and must’ve been quite a sight in its prime. I’ve been collecting photos of this iconic structure, which I’m going to cover later this year.

The landscape of the valley changed dramatically in the preceding 16 years. The viaduct was demolished in 1969 and the A470 was constructed shortly after.

The dominant feature is now the roundabout and the new A road. Demolition of the viaduct began in 1969 but the final pillars weren’t removed until 1973. This photo was taken on 21st March 1973 and you can see work still underway.

This photo shows the village in fantastic detail. St Michael’s Close and Castell Coch View haven’t been built yet. Grants Close is just a field and the old primary school building is still there.

I posted some aerial photos of Castell Coch from the Royal Commission on the Ancient and Historical Monuments of Wales (RCAHMW).