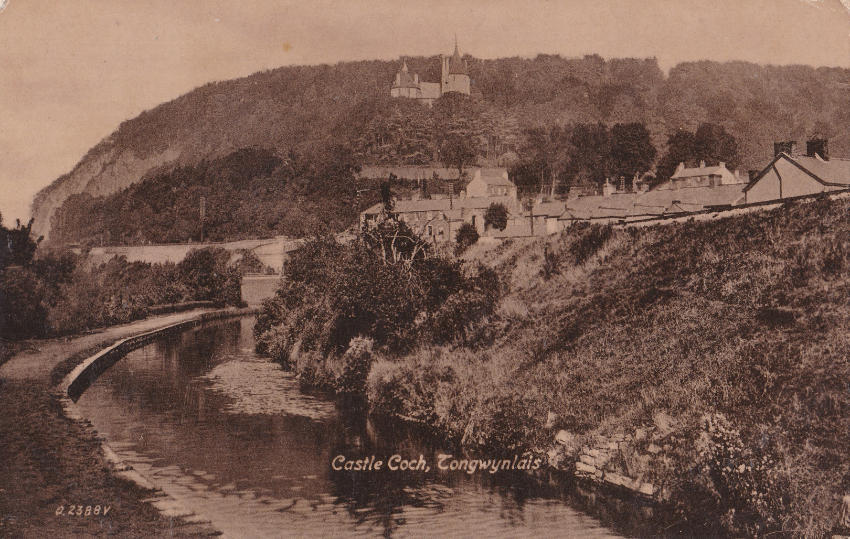 Welcome to a brand new instalment of my long running “Postcards from Tongwynlais” series. I’ve got a classic view of Castell Coch overlooking the village and Glamorganshire Canal for you to enjoy.

The card wasn’t posted so there’s no postage stamp unfortunately.

There are a few clues to help us age the postcard. The Cardiff Railway bridge was built in 1902 so the photo wasn’t taken any earlier. The reverse has a divided back, which was introduced by the Royal Mail in 1902, so the card wasn’t printed before that either. Finally, there isn’t a message referring to inland postage, so this suggests it was produced after 1906 when the standard postcard design was adopted around the world.

The first instalment in this series featured a postcard by Hardings’ sent in 1911.

In the 1914 Grace’s Guide, they are described as “Stationers, Printers, Paper Merchants, Account Book and Paper Bag Makers”. Other specialities include “Picture Postcards in every style”.

The company was established around 1860 by Thomas Harding but in 1914 it was run by William and Sydney, the founder’s son and grandson. There’s no obvious reason why they use different names. I wondered if William and Sydney changed the name to “Hardings’ (Bristol & Cardiff)” after Thomas left the business, but the dates on other postcards don’t support this.

If you enjoyed this post, help spread the word by sharing it using the buttons below.