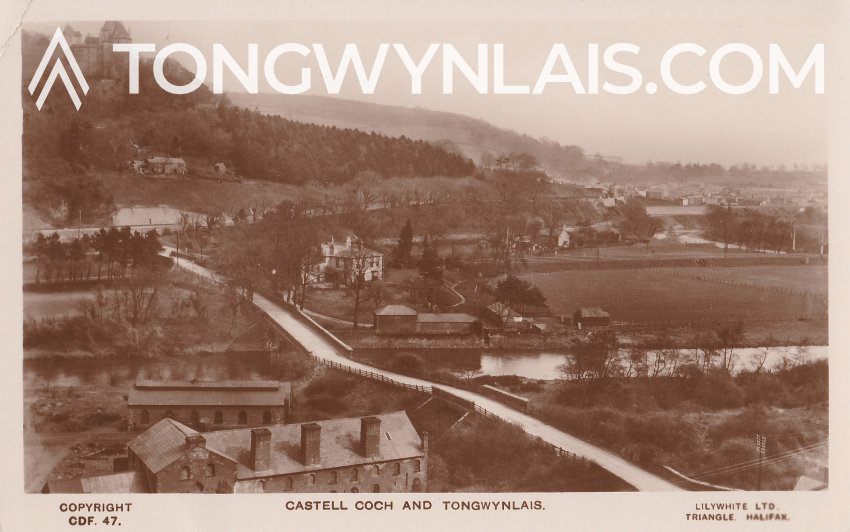 I have another fantastic image of Tongwynlais looking across the River Taff from Pentyrch.

In the foreground are buildings from the Pentyrch Steel and Tin Plate Works. The bridge across the River Taff is Ynys Bridge, which was built in 1808 and is Grade II listed. Ynys House, in the centre above the bridge, is a 19th Century replacement of a 13th Century farmhouse.

Castell Coch cottages are visible on the hillside underneath Castell Coch. The railway passed through the tunnel below them and you can just make out where it ran underneath Merthyr Road.

Arthur Frederick Sergeant (1882 – 1952) founded Lilywhite & Company in 1910. They moved to Triangle, Halifax in 1921. Fire destroyed all their negatives and prints in 1931. The company eventually moved to Brighouse. Arthur eventually became the managing director of Raphael Tuck & Sons and later joined F Frith & Co as managing director in 1939. These were two of the biggest postcard publishers in the UK.

This postcard is a perfect example of how they were used as a primary form of communication. The message is purely used to inform the recipient of the sender’s travel plans.

If we assume the postcard was posted and stamped on the Wednesday then we can use the date to determine the postcard must have been sent in 1939. Lilywhite LTD. were only based in Triangle until 1931 so the photo and postcard may have been produced quite a few years earlier.